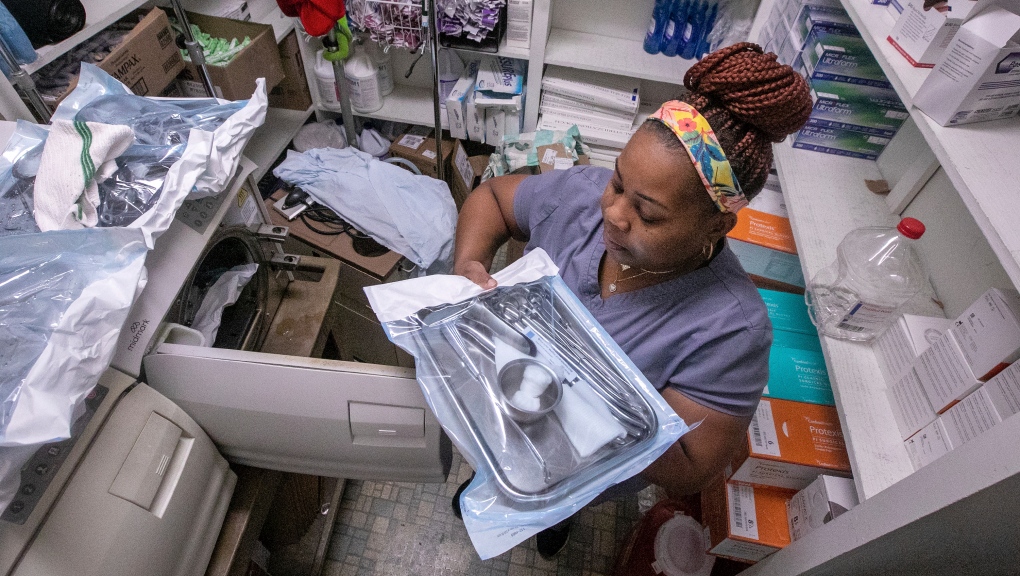 The 26-year-old had considered sterilization in recent years but had taken no action. Then came the Supreme Court decision overturning Roe v. Wadeand she began spending her evenings searching online for surgeons who perform the procedure on young people.

“I was worried it would be difficult to find a doctor to perform a tubal ligation because I’m a young, single woman in a red, conservative state,” said Carden, who lives in Irving, Texas.

She made numerous calls to gynecologists’ offices, only to find that many had been booked for the next few months. She finally found a consultation appointment and is excited to start the process.

“Where I live, and in many surrounding states, the trigger laws in place have no exceptions, even for rape,” Carden said, referring to state laws banning abortion that were to come into effect with the annulment of Roe v. Wade. .

“Because of that,” she added, “I’ve decided that the best decision for me would be to control the things I can and get my tubes tied.”

Carden is not alone. Since the Supreme Court ruled that Americans no longer have the federal constitutional right to abortion, several gynecologists have told CNN they’ve seen an increase in the number of people requesting tubal ligation — a larger surgery. commonly referred to as having the tubes tied.

The decision to be sterilized can raise personal and ethical questions, and for some people it is not easy. But women, non-binary and transgender people who have decided not to have children say it’s a choice they want to feel free to pursue without backing down.

SOME DOCTORS REFUSE YOUNG PEOPLE SEEKING TO BE STERILIZED

The procedure, which involves cutting or surgically sealing the fallopian tubes to prevent future pregnancies, is not easily reversible.

Research has found that a small proportion of women – between 1% and 26%, according to different studies – regret the decision later in life, according to the Centers for Disease Control and Prevention.

Sterilization is a common form of contraception among married couples, but only about 4% of women in their twenties have their tubes tied, the CDC says. Women who were young when they were sterilized reported higher rates of regret.

DeAndra Childress, 33, told CNN that she had repeatedly tried to have her tubes tied. But she said four different doctors refused to perform the procedure on the grounds that she might regret the decision later in life.

“I was told that I was too young, no children, not married, that I could marry later and that I should wait until I had a husband,” she said. “All the methods to control my body. It infuriates me.”

Now, the Spring, Texas medical technologist is more determined than ever to be childless in a post-Roe v. Wade. She discovered a list, circulating on social networks, with the names of doctors who practice the intervention on young women, and is looking for those closest to her. She plans to set up a date soon.

“I hope with this change doctors will be more open to these procedures for single, non-parental women,” Childress said of the Supreme Court ruling.

“I was hesitant about children for years, but I decided not to have any until I was sure I wouldn’t ruin a child’s life,” he said. she stated. “Roe v. Wade looks like the ultimate slap in the face for women, and it’s completely about control.”

A vocal movement of young women and non-binary people is speaking out on social media to embrace sterilization as their preferred method of contraception. There is also a group of doctors who use platforms such as TikTok and Instagram to answer questions about sterilization and educate people on issues related to reproductive health care.

After the Roe v Wade reversal, an obstetrician from Rochester, New York, shared a list of more than 1,000 doctors nationwide who provide sterilization services regardless of patient age and marital status. OB-GYN, Dr. Franziska Haydaneksaid he recently noticed increased interest in sterilization among his 173,000 followers on TikTok.

When Haydanek performs tubal ligation, she requires her patients to be at least 21 years old if using Medicaid and to follow counseling about the effects of female sterilization. These include the fact that it’s irreversible, meaning a patient can’t get pregnant again without IVF, she says.

She also makes sure each patient understands the risks of surgery and knows there are reversible options such as intrauterine devices, she said. Intrauterine devices – or IUDs – can last for years, depending on the type.

“No state requires you to have children before tubal sterilization,” Haydanek said. “The age requirement (being at least 21) is only valid if you have government subsidized health insurance. Otherwise, it’s all up to the doctor’s discretion, which is why many young patients struggle find a doctor to honor their wishes.”

Dr. Charisse Loder, gynecologist and assistant professor in Michigan Medicine’s Department of Obstetrics and Gynecology, also offers sterilization surgery. She recommends removing the fallopian tubes rather than tying them because it reduces the risk of ovarian cancer later in life.

“I used to see about one person a week to discuss sterilization, and this week I have six people scheduled for consultations,” Loder said earlier this month. “Over the past two weeks I have had patients tell me that they were worried about their access to contraception, that they were unsure if they would be able to have a sterilization procedure at the future and that they were terrified of getting pregnant with no reproductive choice.”

Many of his patients told him that they had decided some time ago that they wanted the sterilization procedure, but put it off until the Roe v. Wade, Loder said.

“Before surgery, all my patients tell me that they are sure of their decision and they confirm that it is the best plan for them,” she said. “And I think it’s my duty as a physician to respect my patient’s autonomy in making this decision, as long as there is no significant risk of harm.”

A FLORIDA RESIDENT HOSTED A PARTY AFTER GETTING THEIR TUBES TIED

Isa Ruiz always knew that children were not part of his plan.

But the 22-year-old Orlando communications specialist, who identifies by his pronouns, didn’t give it much thought until Associate Justice Amy Coney Barrett began serving on the Supreme Court in fall 2020.

“That (toppling Roe against Wade) is something that we’ve all been worried about since 2016, maybe even longer,” Ruiz said. The appointment of Barrett, a Tory, to the High Court “has filled me with a great deal of urgency and certainty in my decision to have myself sterilized”.

Ruiz said she tried to find a reliable contraceptive, but had negative reactions to hormonal contraceptives and the copper IUD.

“I quickly realized that none of these methods were a viable option for me,” they said. “As someone who never wanted to conceive, it was ridiculous for me to subject myself and my body to so much trauma for a temporary fix when a permanent fix would better meet my needs.”

In April 2021, after being refused by several doctors, Ruiz had his tubes tied at the age of 21. They marked the milestone with a party attended by a few close friends. Decorations included inflated condoms shaped like balloons and pink pool noodles tied like fallopian tubes.

“However, by far my piece de resistance was my cake,” she said. “I ordered a cake, pretending it was for my friend’s elopement, which said ‘congratulations on getting married!’ Ruiz then edited the post to say “congratulations on tying the knots!”

Now Ruiz is on a mission to educate others interested in the procedure.

Ruiz helped her friend and fellow Orlando Alie Wagner find resources and have her tubes tied in January after months of refusal by doctors.

Wagner, 26, has hereditary health conditions that she says would make pregnancy risky and could be inherited by biological children. Ruiz recommended a doctor who performed a tubal ligation without doubting his decision.

“Unfortunately, he’s not the first doctor I’ve spoken to about my choice to have my tubes tied, but he’s the first one who hasn’t questioned me or tried to convince me that I shouldn’t do it or that I would change my mind in the future,” Wagner said.

“One of my doctors in the past went so far as to say I should have kids because I would have such cute ginger babies since I have red hair. As if having a cute baby was reason enough to change opinion on not wanting a biological child.”

Both Ruiz and Wagner said their partners supported their decisions.

Now that Roe v. Wade was waived, Wagner, Ruiz, Childress and Carden all said they felt more confident they made the right call. And they still attend demonstrations for the right to abortion.