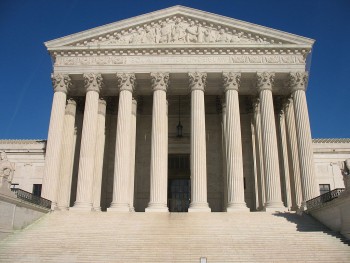 A third day of protests are scheduled for Sunday in downtown Los Angeles as outcry continues over the U.S. Supreme Court’s decision to strike down federal abortion protections in Roe v. Wade.

Groups The Feminist Front and Generation Ratify are calling on protesters to wear green for the rally at 1 p.m. Sunday at Grand Park, 200 N. Grand Ave.

The Feminist Front describes itself on Twitter as “young people uniting 15-35 year olds to fight white supremacist patriarchy, from the root up”. Generation Ratify bills itself as “the youth-led movement to ratify the Equal Rights Amendment and advance gender justice in the United States.”

Two large protests took place in Grand Park on Saturday, which drew at least a few hundred people before noon, and another outside the federal courthouse on First Street attended by hundreds more.

Another rally was held outside the Federal Building in Westwood.

Similar protests have taken place across the country and in other Southland communities, including Hollywood, West Hollywood, Long Beach, Fullerton, Irvine and parts of Riverside and San Diego counties.

As at previous downtown Los Angeles rallies, attendees held homemade signs with messages such as “Ban Guns, Not Abortions”, “Mind Your Own Uterus” and “My Body, My Choice”.

Many said they just needed a place to be with like-minded people and vent their frustration and disappointment.

Some of Saturday’s downtown protesters spilled onto nearby freeways, the Los Angeles Police Department said in a series of tweets:

— 3:42 p.m. — “Pedestrian protesters have now entered the 101 Freeway off-ramp from Broadway Avenue. Avoid the area and use alternate routes if possible.

— 3:59 p.m. — “The off-ramp for Highway 101 has been cleared. Pedestrian protesters are now heading west on 1st Street from Main Street. The LAPD advised motorists to avoid the area and use alternate routes if possible.

— 8:57 p.m. – “The crowds have dispersed and traffic has been restored. We again want to thank the men and women who worked long hours to ensure that citizens could exercise their 1st Amendment rights.

On Friday, hundreds of protesters gathered downtown in the hours following the announcement of the Supreme Court’s decision. The protests were largely peaceful, but skirmishes with Los Angeles police officers were reported, prompting the department to declare an assembly illegal and issue a temporary citywide tactical alert to clear the streets.

No arrests were reported on Saturday, but media reported that at least one person was arrested on Friday.