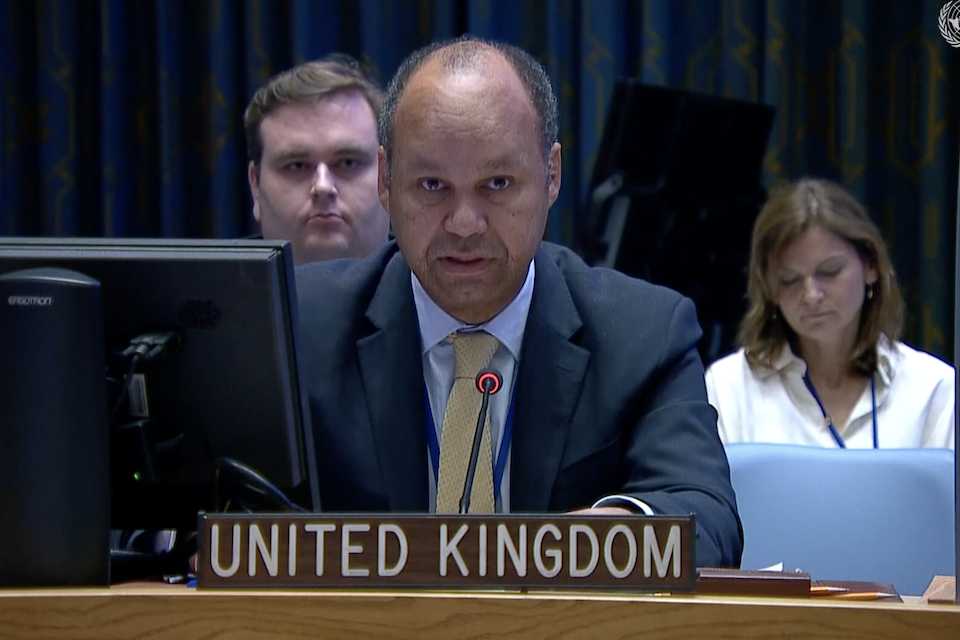 I thank SRSG Wane for his briefing and would like to echo the condolences expressed by others regarding the recent deaths of Egyptian and Jordanian peacekeepers serving with MINUSMA. We pay tribute to their courage and sacrifice. I also welcome the vital perspective Ms. Touré has given us on the challenges facing the people of Mali, especially women, youth and children. And, I welcome the presence of Foreign Minister Diop at this meeting.

When the Council last met to discuss Mali, there had just been reports of a massacre in Moura. Hundreds of civilians killed in counter-terrorism operation involving Wagner Group mercenaries. At the time, many members urged the Malian authorities to grant MINUSMA immediate and unimpeded access to conduct an independent investigation. More than two months have passed and MINUSMA continues to be denied access to the area.

The UK is deeply concerned about this and many other instances of unacceptable restrictions imposed by the Malian authorities on MINUSMA, particularly on air movement. Restrictions on free movement and violations of the Status of Forces Agreement hamper the Mission’s ability to carry out its mandate and undermine safety and security.

MINUSMA’s latest quarterly human rights report is clear: the Moura incident was not isolated. While we continue to be deeply concerned about the escalation of terrorist violence and abuses against civilians, the report also documents a significant increase in human rights violations by the Malian Defense and Security Forces, with the involvement of so-called “foreign military elements”. Members of this Council are under no illusions – this is the Russian-backed Wagner Group.

Counter-terrorism operations must be conducted in full respect of international human rights standards and international humanitarian law. Continued violations only fuel the cycle of violence. It is in Mali’s interest to allow professional UN investigators to operate freely.

Mr. President, the root causes of conflict and insecurity in Mali must be addressed. An inclusive political transition is essential. We note the authorities’ recent statement on their preferred timeline. We strongly encourage the Malian authorities to continue the dialogue with ECOWAS in order to reach an agreement.

The recent visit of Under-Secretary-General Martin Griffiths has once again highlighted the worsening humanitarian crisis in Mali – it continues to disproportionately affect women and girls. The increase in violence in Ménaka is causing massive displacement, an increase in humanitarian needs and serious risks for civilians. The UK salutes the vital work of aid organizations and, following the shocking attack on two Red Cross workers on 1 June, we reaffirm that aid workers must not be targeted. We call for full, safe and unhindered humanitarian access.

Finally, Mr. President, we support the renewal of the mandate of MINUSMA later this month. But, as we begin negotiations, the Council needs a frank conversation about what the political, human rights and security developments of recent months mean for the future of the Mission. Simply maintaining the status quo is not sustainable. We therefore support the Secretary-General’s proposals for a review to determine how MINUSMA can best continue to meet its priorities. And we look forward to working with France and other colleagues on this important renewal of the Mandate.