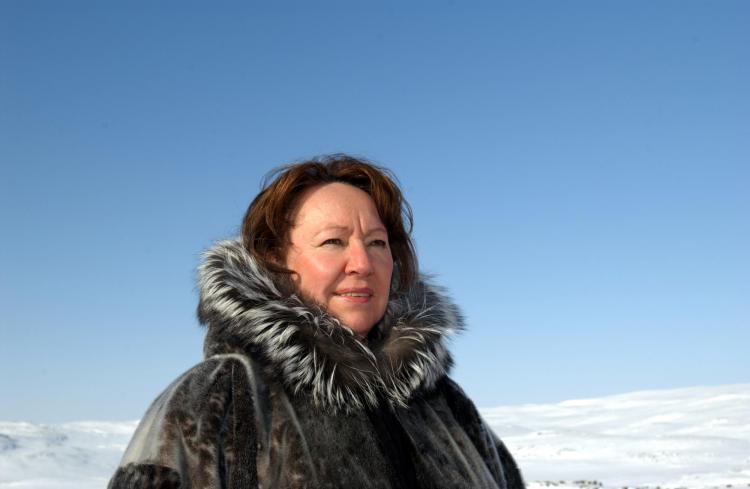 Sheila Watt-Cloutier, a global advocate for Indigenous rights and health and a leader focused on the human rights impact of climate change, will deliver a keynote address at the Right Here, Right Now Global Climate Summit at CU Boulder in December.

In 2005, Watt-Cloutier launched the world’s first international lawsuit on climate change: a petition to the Inter-American Commission on Human Rights alleging that US fossil fuel emissions – a major contributor to global warming climate – violated Inuit culture and environment. human rights.

S. James Anaya, Distinguished Professor at the University of Colorado School of Law and Chair of the Right Here, Right Now Summit Steering Committee, described Watt-Cloutier as a pioneer in raising awareness of the immediate impacts of climate change on people. human rights.

“His petition in 2005 on behalf of Arctic Inuit who saw – and still see – their way of life and survival threatened by warming temperatures, opened up new avenues in climate advocacy,” said Anaya. “Throughout her work as an innovative leader, author and speaker, she has inspired bold new thinking to find solutions to the climate crises that affect us all.”

Disproportionately affected by climate change, the Arctic is home not only to polar bears, but also to millions of people, who struggle to maintain their way of life as their home heats up twice as fast as the rest of the planet. . Watt-Cloutier has gone from humble beginnings in the Arctic to the world stage advocating for the cultural survival of Inuit communities.

“Climate change is as much about people as it is about land, and the science, economics and politics of our changing environment must always have a human face,” Watt-Cloutier wrote in her 2015 memoir. The right to be cold: the story of a woman who protected her culture, the Arctic and the entire planet. “[We need] ensure that the health of the planet and its people, rather than national interests, determine greenhouse gas emissions targets.

Watt-Cloutier was nominated for the Nobel Peace Prize in 2007 (along with Al Gore) and in 2015 he received the Good Livelihood Award for his “lifetime work to protect the Inuit of the Arctic and to defend their right to maintain their livelihoods and their culture, which are seriously threatened by climate change”. For this work at the intersection of human rights and the environment, she has also received the Sophie Prize (2005), the Champion of the Earth Award from the United Nations Environment Program (2005), the Rachel Carson Prize (2007) and the Prince Albert of Monaco Foundation Climate Change Prize (2017).

The Dec. 1-4 summit, co-hosted with United Nations Human Rights, will bring thought leaders, youth activists, scientific, political, educational, cultural and industry experts from around the world to campus for public speeches and panels exploring how climate change impacts fundamental rights, including the right to food, clean water, housing and health.

Watt-Cloutier is the second of several keynote speakers to be announced. The first was former Irish President Mary Robinsona well-known climate justice advocate.

After working for the Kativik School Board and the Nunavik Education Working Group, Watt-Cloutier was elected in 1995 as Corporate Secretary of Makivik Corporation—the political organization representing the Inuit of Nunavik. That same year, she was elected president of the Canadian branch of the Inuit Circumpolar Council (ICC), an international non-governmental organization founded in 1977 to represent the interests of Inuit in Russia, Alaska, Canada and Greenland.

A primary focus of his work in both roles was to address the health threats that persistent organic pollutants (POPs), such as polychlorinated biphenyls (PCBs) and the insecticide DDT, posed in Arctic communities. , especially for nursing mothers and their babies. Watt-Cloutier was instrumental as a spokesperson in the negotiation of the Stockholm Convention on POPs, which regulates these toxins in hopes of minimizing their impacts. The convention was adopted in 2001, entered into force in 2004 and has since been ratified by 179 countries.

From 2002 to 2006, she held the elected position of International President of the ICC, representing not only Canadians, but all Inuit in the circumpolar regions.

In December 2005, Watt-Cloutier started a petition titled “Seeking Redress for Violations Resulting from Global Warming Caused by the Acts and Omissions of the United States.” She was joined by 62 Inuit hunters and elders from communities across Canada and Alaska, delivering the document to the Inter-American Commission on Human Rights (IACHR) and launching the world’s first international legal action on climate change. . Although the IACHR did not hear the petition, Watt-Cloutier and his team were invited to testify at the committee’s first hearing on climate change and human rights in March 2007.

“Without a stable and secure climate, people cannot exercise their economic, social or cultural rights,” writes Watt-Cloutier in his memoirs. “For the Inuit, as for all of us, this is what I call the right to be cold. And that’s what I’ve fought for in the last 20 years of my job.

As a world leader in climate, environment and energy research, the University of Colorado at Boulder is partnering with United Nations Human Rights to co-host the Here, Now World Climate Summit in the fall of 2022.